The layout of the input form can be altered by using the various controls in the toolbar.

Columns visibility function allows the user to change the order and the number of columns on every input form. Following instructions show how to do that:

2. Once it is open, click Columns visibility on the input form and the following pop up will open.

3. Functionalities of each column will show up on the right side under actions when mouse pointer is hovered over the trigger area: 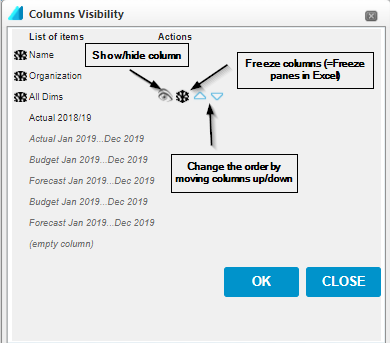 4. Hidden columns are colored grey and italic on the above list

6. To make the changes permanent, save the input form by clicking "Add bookmark" on the ribbon. Otherwise the old layout of input form will remain.

Adding a new input code is possible to rows where it says "none" in the input code column. Double click the text "none" and the following drop down lists all the available input code types:

After the right input type is selected, a new window will open up where the parameters of the input code can be set. The different types of input codes will be covered more in detail in their own separate articles.

As mentioned earlier, input code can be added only to rows with text "none". In addition, Input code column may contain the following symbols:

Above symbols indicate that an input code already exists but it has been added to a lower or higher level in the account structure. In the below example, the input code is on account group level preventing input codes to be added to lower levels:

Most of the input codes require additional parameters for calculating the values. For example, growth percentage from previous year needs a percentage. These Input Code Values or IC Values are entered to their own data level either on 'IC Values' or 'IC or current values'.

'Run' button in the Planning scenario grid will execute the actual calculation after the IC values have been entered. The results of the calculations can be examined by changing the data level back to the planned level(=budget). However, depending on the structure of the input form and visible columns, changing data level may not be necessary. Different data levels are explained below: